Well, it was inevitable. I’m having a “blah” day. Not exactly a “blue” day (which is one of my favorite books; if you ever happen upon it, read it), but one of those days that I could stare at the wall for 3 hours and not notice the passing of time.  No particular reason, I slept fine, no one said anything mean this morning, there’s a lot to do at work, but I’m not particularly stressed.  I didn’t even get ignored by anyone.  I’m just “blah”.  However, before this starts sounding too much like a 13 year-old girl’s diary entry, let me make some ‘intelligent’ or perhaps simply interesting, statements.

Lessons from translating: A. Translating to American English seems to be a lot of extra work. Stupid kilometers to miles calculations are getting to me. And let’s not get started on the MM/DD/YYYY fiasco! A few days ago I spent a little over an hour simply switching the days and months of 4 pages of dates. B. Quotes taken out of context can be a pain for the translator. Case and point: a powerpoint I was translating the other day had a quote from Napoleon Bonaparte which in Portuguese was “Prefiro sofrir a ficar inerte” which loosely translated would be “I prefer suffering to becoming stagnant.” While this fit the original context, I hunted down the original quote which happened to be “I would rather suffer with coffee than be senseless.” To make matters ‘better’ proceeding that sentence he stated. “Strong coffee, much strong coffee, is what awakens me. Coffee gives me warmth, waking, an unusual force and a pain that is not without very great pleasure.” Now for those familiar with Adventist culture and teachings, I can’t exactly use this original quote with “coffee” right in the middle.  So after 30 minutes of haggling with those in charge, we finally settled on a completely different quote unrelated to cafeinated drinks.

Cultural Holidays: I forgot to write about my April Fool’s fun. I started the day by handing out chocolate for my birthday the next day, since we had Friday off and I wasn’t going to see anyone on my actual birthday. After I settled into my office it hit me, “April Fool’s Day!” and I had a whole building full of unsuspecting victims, since it’s not fun pulling tricks on Americans who are already expecting something. Well, once I educated Susan about the joys of the holiday by reading her some AF news articles from the BBC, we were motivated to spread the “joy” around the office. We chose to hit mostly people that we knew well enough, who would assumedly continue talking to us afterwards. The highlight of our day was the fact that I brought my vial of liquid Cayenne pepper. So we spread some drops on pieces of gum and snuck into offices of friends dropping pepper into water bottles. Overall, a successful day. And additionally, I feel like I spent my time properly educating a group of people about the cultural norms of other groups of people (Americans aren’t the only ones who celebrate the day, you know).  A job well done on my part.

And here are some pictures of some of us eating oranges and drinking apple cider in the back yard last weekend.  Good times. 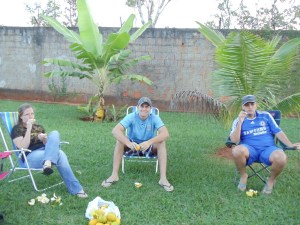 Victor Hugo, Bruno
Well, I believe it is now time for me to eat a piece of chocolate, wander over to Rita’s office to talk for a while then find something extraordinary to do in order to pull me out of this funk. Maybe a good round of Disney music will help.  Peace!