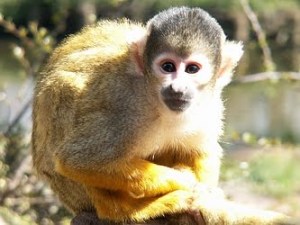 There is nothing quite as delectable as miscommunications when having a conversation in three languages.  My most entertaining “conversation” yet was a pseudo-English lesson at Sabbath lunch.  I was explaining to one friend how I have a Brazilian friend who claims never to have seen a monkey in the wild before.  This seems strange to me considering I’ve already seen wild monkeys since being here (not the same one pictured, but similar).  Another friend was walking by and stopped to complain that we could communicate in English, claiming that she would never be able to understand a thing.  So the teacher gene in me got her to sit down and try understanding.  After a good half hour of hand gestures and slow pronunciation she understood the first sentence of “My Brazilian friend never saw a monkey.”  So we tried moving on to the sentence “I saw a monkey last week.”  Well, she had a look on her face as if she understood, although unsure, so my first friend and I decided to test and asked “what did we just say?”  She looked at us, smiled and said in Portuguese, “You have never seen men here in Brazil, only monkeys.”  Well, of course, my luck, she said her interpretation loudly in Portuguese which allowed everyone in the room to understand.  This led to a round of “what?!”s and “did she say Brazilian men are monkeys?”  After quite a bit of explaining, on both of our parts, we got it all cleared up, although there may be some Brazilian men still upset with me, I’m not sure.