I’m rather forgetful. I wish I was different, that certain things sparked my memory or haunted my thoughts, but nothing sticks for too long. One of the things I’m particularly bad at is dates. I would forget my own birthday was coming if Facebook didn’t remind me of it. So of course, as life often happens, I married someone who took the effort to commit things to memory. He’s the anniversary keeper in our marriage. And he knows it all, the anniversary of the first day we met, the day he asked me out, the day he proposed, the day I left Peru, the day he came to the USA, the day we got married, the first time we changed a flat tire… he knows it all. Although I highly suspect he has an App hidden somewhere helping him out with some of those.
But we’re a family that likes to celebrate, so it works great that he has in mind so many dates to commemorate. Tonight the occasion was the 1 year anniversary of when he arrived in the USA. We had been apart for 11 and a half months, and only got to see each other once in that time for about 3 days. A year ago I picked him up at the airport and for the first time ever, drove him around. Although it was late, we grabbed a quick bite at IHOP before I dropped him off at the house where he would be staying until the wedding. I tend to bring people to IHOP when they first arrive from overseas, though I’m not sure why. I guess it’s the most American food I know. A year ago it seemed strange to sit down across the table from this man that used to live in my iPhone. 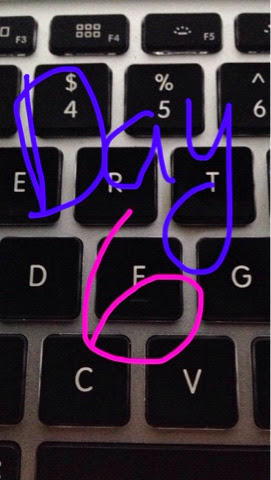 When we went out tonight I thought to myself, “What a silly anniversary to keep.” Though that never gets in the way of having an excuse to order stuffed french toast. When taken from The word “tradition” holds a strange connotation for me I guess. Most of our family traditions growing up were for us kids. At least I had always assumed that they were. We celebrated Easter the same way every year, because us kids liked it so we wanted to do it again. We opened presents in the same way every Christmas because kids need some sort of structure to know what to expect in these sort of events. When I grew up I didn’t think I’d worry about keeping any special traditions of my own, though I always heard “you’ll start your own traditions when you have your own family.” I just always assumed that I would set up those traditions for my kids when they come around. Then I had a few sad holidays with no traditional aspects, and they were horrible. For several years I celebrated Christmas out of the country, and nothing about it felt like Christmas. In Brazil I ate tacos, in Peru I watch Titanic on TV then fireworks with my sister-in-law over Skype, and ate lemon pie. None of which says “Christmas” to me.

And now I have my own family. It’s just me and Dani right now, and that’s pretty awesome. We’re still in our first year of marriage, but we’ve spent 2 Christmases together (3 if you count that one of our first dates was eating lemon pie together on Christmas afternoon). We still haven’t established traditions as they’re often understood. But tonight as we sat at IHOP chatting into the evening, I realized the true importance of traditions. Day 6: Creating and keeping traditions helps us blend the past, the present and the future. It’s not a matter of pulling out the same ornaments every year just because that’s what we do. It’s pausing normal day-to-day activities to appreciate what you’ve been through together, remember the great moments, evaluate the time that has passed, express what you’ve both learned and share the experience together. There’s no need to live in the past, but I’d be a fool to pretend like it didn’t happen. And one of the best ways to hold onto the good and keep getting better is to take the time to mark moments in history as they’re happening and remember the value moments that have gone.